The Benefits of tDCS

The traditional belief that you were born with your brain, that it will stop developing at a certain age and things just go downhill after that is now being challenged with new developments in neuroscience. Current  studies show that you can refresh your brain, enhance its capability and have a better functioning brain by simply using a technique called Transcranial Direct Current Stimulation or tDCS.

The rediscovery of electrical stimulation began in 1999 with neurologists Walter Paulus and Michael Nitsche at the University of Gottingen in Germany and others including Alvaro Pascual-Leone associate professor of neurology at Harvard University. By 2005, the fascination and interest with the applications of tDCS had grown to such a degree, that research exploded from 2008 onwards. There are now 75-80 well researched articles in peer reviewed publications.

The first reported use of tDCS was in 48AD, and again in the 1800’s in Europe  before its modern resurgence in the early 2000’s. tDCS is a neurophysiologcal technique delivering weak electrical currents directly to the brain with an aim to adjust and harmonise the activity of the brain neurons. In tDCS a constant, low current (0.5mA to 2mA) is delivered with scalp electrodes directly to the specific area of interest in the brain for a specific period of time in each session.

The key to maximise the utilisation of tDCS is to know where to position the electrodes. This protocol selection is determined by qEEG brain mapping which is referenced to a normative database. A typical tDCS session is 20 minutes and the effects can last from hours to days. The effect of sessions is cumulative and even chronic conditions have been shown to improve.

What Conditions can tDCS Improve?

Are there any Side Effects?

As with any intervention designed to impact the central nervous system, side effects are to be expected. Since the current is very weak, most people feel nothing except for sensitive people who report a “slight tingle or itch”. Only about 50% of the current is shunted across the skin as the head is a poor conductor of electricity. Fortunately, the side effects that may be experienced by some sensitive people using tDCS are mild and transitory. For this reason, tDCS should be delivered by a qualified and trained health professional after qEEG testing is completed to determine the required protocol.

The overall effect of tDCS is to make a specific area of the brain work more effectively – something akin to “a morning cup of coffee” applied to a relatively focal part of your brain – the one that is needed for you to engage and enhance task performance.  In 2003, Paulus’s team produced evidence that cognitive enhancement is possible after tDCS sessions.(Journal of Cognitive Neuroscience, vol 15, p 619). Pascual-Leone from the Medical Center in Boston, Massachusetts also demonstrated that in the area of working memory  (memorising facts, word lists, times tables) tDCS stimulation was like “increasing the amount of RAM available.” 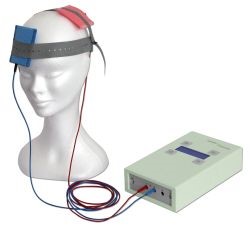 The exciting news is that tDCS has real promise and is now becoming widely accepted by health professionals as a simple, safe and non-invasive brain stimulation procedure with minimal side effects. It would appear that almost any brain function associated with a specific, localised region of the cerebral cortex is potentially amenable to tDCS. Anything buried deeper in the brain, however, is probably not accessible except with dangerously strong currents.

Clinical results here in Australia and overseas are encouraging and show that tDCS can improve the quality of life for those suffering from chronic depression, pain and cognitive issues.

To make an appointment for a qEEG and tDCS please contact Learning Discoveries on 9637 9998.