The United Nations designated April 2nd an official health-specific day to bring attention to Autistic Spectrum Disorder (ASD) and to celebrate the talents and skills of those with autism. Recent figures indicate that 1 in 77 children in the USA and 1 in 110 in Australia will be diagnosed with ASD in the next year.

The world will light up blue on World Autism Awareness Day 2014 as the seventh annual celebration.

Autism is a complex neurological disorder characterised by impaired social interactions of verbal and non-verbal communications and by restricted, repetitive or stereotyped behaviour.

Approximately a third to half of individuals with Autism do not develop enough natural speech to meet daily communication needs. Differences in communication may include delayed onset of babbling, unusual gestures and diminished responsiveness.

Children with ASD are less likely to make requests or share experiences, and are more likely to simply repeat others words (echolalia). They can also have difficulty with imaginative playtime and developing symbols into language.

The most common behaviours seen in children with Autistic Spectrum Disorder include; 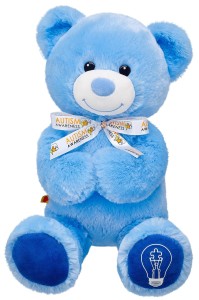